Making the most of basic nursing skills abroad 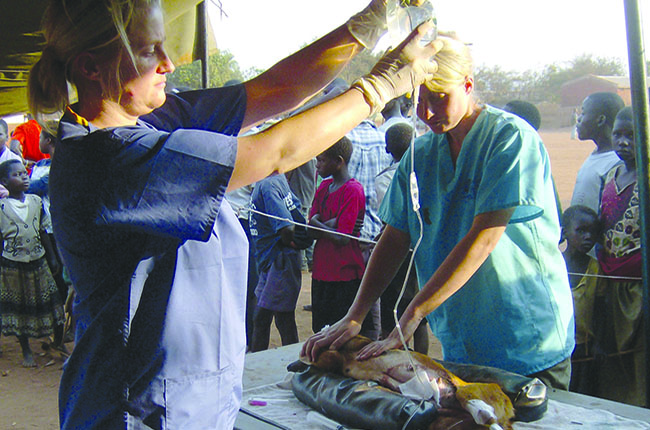 I was going about my daily routine in the practice on an average day – neuter surgery, dentals and x-rays – when one of the junior vets started to talk about volunteer veterinary work abroad. He had recently been involved with a project at a neutering clinic in Greece through the Worldwide Veterinary Service (WVS). I was curious, so I asked him about the charity and what volunteering involved.

At home that evening I fired up my laptop and, instead of logging onto Facebook, I Googled WVS. I liked what I read, and decided to take the first step, which was to become a member. Membership costs £30 and is necessary to be able to apply for a trip; I thought that even if I decided not to go on a trip, I was contributing to a worthy cause. Once my membership was accepted, I started browsing through the opportunities, keeping a watchful eye on them and assessing each one. The trip to Malawi caught my eye and, having read the description and agreeing with the charity's aims and protocols, I submitted my application. The project involved neutering dogs and rabies vaccination.

When I got the call confirming that I had been accepted for the project, my nerves started to kick in. It was more excitement than fear, but I did question whether I was doing the right thing and whether I was good enough. The WVS sent the project itinerary and requirements, including the necessity for rabies vaccinations, which I found a bit daunting. The weeks passed and everything was in place – I was good to go. After a short flight from Glasgow to London Heathrow, I met up with the rest of the WVS team, which consisted of two vets, myself and one other vet nurse, as well as the WVS project coordinator, Tess. I was nervous, but incredibly excited at the same time about the adventure that awaited us.

"When I got the call confirming that I had been accepted for the project, my nerves started to kick in"

The areas in Malawi that we visited were plagued with poverty. The animals often only survived by eating rubbish or by scavenging. Infectious contagious disease was rife among the animal population. I had not had much experience with these types of conditions as most don't occur in the UK and, typically, UK pet owners are compliant and responsible when it comes to vaccinations and preventative care. Most of the animals that we encountered were riddled with ticks, likely to be carrying tick fever, suffering from diarrhoea and other infectious diseases.

This made preoperative assessment difficult as we could not test for specific diseases and had to make decisions regarding health status and suitability for anaesthesia and surgery based on subjective and basic measures. The criteria used were age, weight and general body condition, whether the animal was in season or postpartum and the level of tick infestation.

Setting up a mobile clinic

That first day was daunting! All the small things that you take for granted in a veterinary practice were missing, including an operating table, running water, clipper blades, autoclaves for sterilisation, and so on. Nonetheless, we managed to set up a workable and efficient mobile clinic. It's amazing what you can achieve with so little. We had no gaseous anaesthesia, so we used xylazine pre-med and ketamine/diazepam combination to induce and maintain anaesthesia. Bitch spays were the most nerve-wracking as we were having to ‘top up’ the anaesthesia using a 2:1 combination of ketamine and diazepam as the anaesthesia wore off.

My main duties involved assisting with and monitoring anaesthesia both pre- and postoperatively, administering antibiotics, analgesics, anthelmintics and flea and tick control. I also placed a notch in the ears of all neutered animals. Apart from neutering feral and local animals, we also worked with the community, educating people on aspects of animal husbandry, nutrition and care. Most people were friendly and welcomed the advice and assistance we offered.

In many situations we needed to go into people's homes, which required consideration of local customs and the fact that most of the people had never seen Westerners before. There was also a language barrier in most cases. Once we gained trust within the community, they were enthusiastic and often followed us around while we performed our duties.

During my 10 days in Malawi, I used the routine skills that I had learned in the UK (and had always taken for granted), and also gained a new set of skills that I would never have acquired in practice. Since joining WVS I have been hooked on helping the charity in any way that I can. Being involved in its amazing work, I have seen first-hand the difference it can make to an underprivileged community and the feral animal population.

Further volunteering in Brazil and India 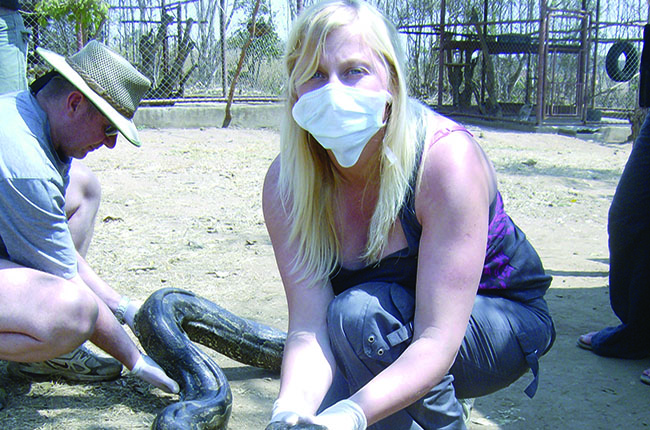 Dawn in India with a python

Since my initial trip, I have visited Brazil and the charity's International Training Centre in Ooty, India, where I have had to deal with creatures great and small – from guinea pigs to a 3 m African python and a crocodile. I have assisted with numerous neutering operations, vaccinations against rabies (helping to prevent the disease in animals and reducing the risk of human exposure), preventative care such as worming and external parasite control and owner education. I have gained new skills and friends along the way and had many life-changing experiences.