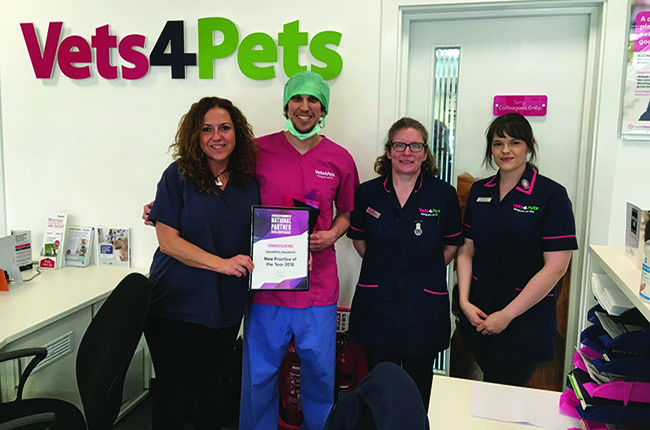 I originally considered studying medicine and also had ambitions to become a choral scholar at Oxford. I ended up choosing biochemistry.

I look back at my four years at Magdalen College, Oxford, with great fondness. The long summer days were spent punting on the river with friends, and I’m amazed at how I got through the degree. It was fiendishly difficult.

My decision to go on to study veterinary medicine was the suggestion of some fellow students who thought I would enjoy the academic challenge. And, after a summer doing work experience my mind was made up.

Vet school went by in a flash and I graduated from the Royal Veterinary College (RVC) in 2010, got married the same summer, and started a job in a supportive three-vet small animal practice in St Albans.

Here I learnt the art of communicating with clients and I also learnt from my mistakes. After two years though, I longed for some experience of emergency medicine. We moved our young family to Wales and I started work in a hospital practice. Here, I became more proficient with ultrasonography and started my certificate in medicine. However, after 18 months my wife and I decided we wanted to be closer to London. We ended up in Cambridge, which was where I first met Gloria. The practice I moved to had a team of experienced emergency vets and an excellent team spirit.

As head vet, Gloria did most of the front-of-house work while the rest of the team took turns to deal with the in-patients and procedures. When she handed cases over, she always made it very clear about which diagnostic procedures she wanted done, her differential diagnoses and the client’s situation (financial and emotional). She made case management a pleasure.

We ended up working together at weekends, and realised that we both appreciated each other’s input to cases and took the same approach with clients. We hadn’t considered the possibility of setting up in practice together until a couple of colleagues suggested that we should. Planning how to achieve it took nearly three years.

"We believe we have the mutual respect, trust and foundations in clinical practice to continue to build a successful practice"

The decision was a difficult one, partly because we had no idea about the practicalities of starting a business. Initial plans to go independent were a tough prospect without suitable premises or a large amount of capital.

A fellow graduate from the RVC introduced me to Vets4Pets in 2016 as he had recently become a joint venture partner (JVP). He was looking to employ another vet, but at that point I was looking to see if a similar partnership was an avenue that could work for Gloria and I. Neither of us was sure but, after convincing Gloria to come to a meeting at the company’s support office, and visiting a couple of in-store practices, our views of working ‘inside a pet shop’ were turned upside down. The practices were clean, well-spaced and well-equipped.

Opening the practice was stressful and recruiting receptionists and vet nurses was challenging. However, we knew what personal qualities we were looking for in our staff – we wanted our team to love coming to work as much as we do. It’s important to involve each other in decision-making.

Ultimately, we believe we have the mutual respect, trust and foundations in clinical practice to continue to build a successful practice.

Vets4Pets Haverhill has been open for just over 12 months and, while we are both tired, going to work is a pleasure and we have the freedom to work the way we want to.

The hard work is paying off. We have had an outstanding start thanks to our fantastic team who have been generous with their time and energy. This culminated in our achievement of winning the 2018 ‘Best New Practice’ award at the Vets4Pets Partner Conference.

It was a fantastic feeling to be nominated, and the whole team was thrilled when we won. It confirmed to us that we had made the right decision to form our partnership and go for it, and demonstrates our desire to provide our clients with the level of veterinary care they deserve. But the hard work doesn’t stop here – we’re looking to win more awards in the future.

I wanted to be a vet from the age of five – I knew no other profession would be a better fit for me.

Although I have times when the romantic idea of saving all creatures great and small clashes with the harsh realities of life, it was the right choice – even more so since Jonathan and I started our practice adventure together. It has been the best thing I’ve done in a very long time.

I graduated in veterinary medicine from the University of Bari in 1997 and completed my PhD in infectious diseases in 2000. The following year I decided to move to the UK with my husband and our young daughter to get a different experience of the profession and to improve my skills.

Since then I have worked for a number of practices and been lucky to work with amazing professionals. In 2008, I became the head vet of a big practice in Cambridge, which was awarded RCVS Tier 3 status in 2012.

As head vet, my work was focused on ensuring the smooth running of the practice, which begins with taking great care of colleagues, our clients and their pets. This is something I thrive on.

I met Jonathan in 2014 when he came to us as a vet assistant. We hit it off and quickly realised that we worked well together, not just from a clinical point of view. Whether it was our ethos, our care for the clients and their pets, our genuine compassion and the desire to practise good medicine, we were always on the same wavelength. At the time we initially talked about opening our own practice together, Jonathan was finishing his medicine certificate and I was studying for an advanced diploma in psychotherapeutic counselling (for people), which I completed last year.

We kind of stumbled across the idea of being JVPs. Although, the rest may be history, we have a bright future ahead.