Learning about the avian industry at the WVPA congress 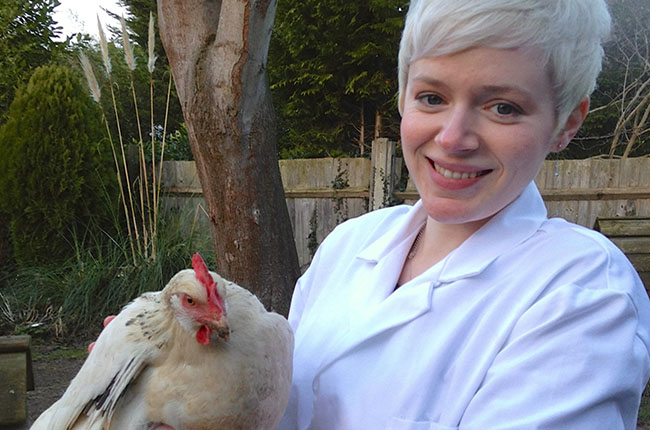 My interest in avian medicine arose from caring for my parents' small backyard flock in Surrey. These birds intrigued me, both by their curious behaviour and their ability to provide numerous eggs for the table with such ease. Since beginning to study veterinary medicine at Bristol university, the number of birds I have seen on placement being taken into general practice has increased year on year. With this in mind, the time dedicated to avian medicine lectures seems only a fraction of that given to other species, and the diagnosis and treatment of avian diseases initially seemed challenging. So, in order to answer some of the puzzling questions I had regarding my own birds, as well as cases I had seen in practice, I sought further experience within this specialism.

Now in my penultimate year of study I have been lucky to be helped by David Parsons, who teaches the avian course at Bristol. He has helped me obtain placements at various avian-related establishments, from large-scale commercial poultry flocks to the small, yet fastidious, pigeon fancier. While assisting Mr Parsons in vaccinating a small racing pigeon loft against paramyxovirus I was astonished to learn that successful racing pigeons can be sold for as much as £100,000 to be used for breeding. We also carried out a simple faecal flotation method on faeces samples from the loft to assess worm and coccidia counts, putting parasitology theory into practice.

When news came that the biennial World Veterinary Poultry Association (WVPA) congress was be held in Nantes (in August 2013), I was certain this was an opportunity not to be missed. Poultry vets from all over the world with backgrounds in academia, research, government, industry and practice would be attending. This would be a fantastic chance to learn about up-and- coming aspects of the poultry profession that I was unaware of, and it would offer me the chance to talk to people working in these areas and hearing of their experiences.

"I was certain this was an opportunity not to be missed"

I was keen to go, but concerned about the feasibility of managing the cost on a student budget. I was directed towards the Houghton Trust Travel Award, which provides grants for young researchers of any nationality working on avian diseases to attend scientific meetings such as the WVPA congress. After contacting the trust via its website, I was prompted towards its online application form and was lucky enough to receive a travel grant to help with the costs.

So, with my student registration confirmed and my flights booked, I was ready to go. Arriving in Nantes, it was easy to spot other congress goers carrying posters that were soon to be unrolled and displayed in Le Cité Nantes conference centre's main hall. The congress spanned four days, kicking off with an opening ceremony where approximately 1000 attendees gathered. This provided a great opportunity to mingle, and it was where I met up with Helen Houghton and Gavin Kelly of Merial's avian team; Merial had provided sponsorship to cover my registration fee.

As well as meeting lots of people at the congress, there was a wide range of talks to attend, presented by eminent world-renowned speakers. In total, 145 oral presentations were on offer, spread over 16 sessions, introduced first by a keynote lecture and then supplementary plenary sessions. There were more than 400 posters displayed in the main hall presenting many research projects.

I found it particularly fascinating to hear in greater detail about diseases that I had encountered before in lectures and on placements. For example, a talk by Jean-Francois Vautherot described the disease cycle of Marek's disease from a cellular level, consolidating my previous learning and strengthening my knowledge of how this disease is spread. I was also intrigued to hear from Robyn Alders about a One Health initiative in Tanzania and Zambia, where an Australian aid funded pilot scheme has helped to dramatically decrease mortality rates in flocks, and improve child nutrition through increased egg production. Professor Alders has developed community-based programmes for the control of Newcastle disease in several African and Asian countries. This highlighted the varied nature of poultry veterinary work and provided deep insights into the potential real-world application of this specialism beyond the confines of the academic learning environment. 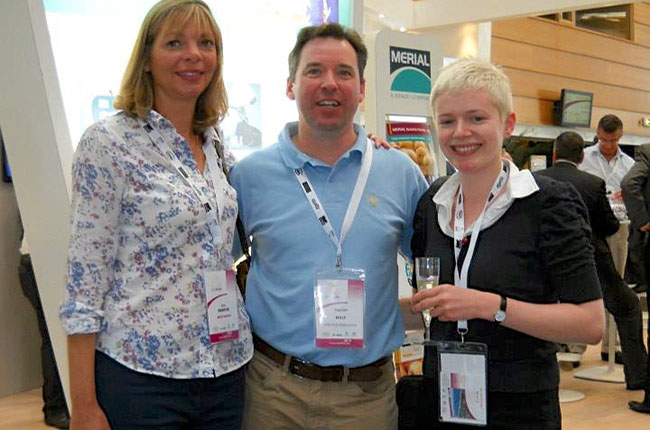 Una meets up with Helen Houghton, Merial’s avian manager, and Gavin Kelly, the company’s poultry specialist, at the WVPA congress in Nantes

Hearing about the importance of poultry rearing in other countries was also insightful. For example, Susana Ramirez-Gonzalez described how 80-90% of families in Mexico raise animals, a large percentage of which are chickens. With backyard poultry production increasing in the UK, the disease issues highlighted in such talks are likely to become more relevant to avian specialists within the UK, as their advice could help solve rising backyard health issues alongside commercial ones.

Being able to meet members in the poultry sector from all over the world was of great benefit to me. They were friendly, approachable and more than happy to answer my questions. It was very pleasant to meet other like-minded students interested in poultry. For instance, a group of PhD students from the University of the Free State in South Africa were staying in the same accommodation as me, and we hope to meet again at next year's congress in Cape Town.

Importance of grants to attend events

Without the travel grant from the Houghton Trust and registration sponsorship from Merial I would not have been able to attend the meeting. I am very grateful for the opportunity and hope that other students will investigate the possibility of applying for grants to attend similar events. Meetings of like-minded people provide invaluable experience of how we may apply academic knowledge and understanding in a professional sphere.

Once qualified I aim to get some experience in mixed practice as disease management across other species and building on client interaction will no doubt benefit my future specialisation in avian medicine. Through experiences such as attending the WVPA congress and visiting so many parts of the poultry production chain (from hatcheries to commercial farms), I have a better understanding of the avian industry and an appreciation of management practices on farms.

I hope this will better equip me in the future in identifying fundamental problems contributing to disease and providing realistic prevention measures. The career path for vets in the avian industry ranges from working in private practice, education, research or pharmaceutical sales to government roles, and hence I am excited to see where this specialism will take me.