Attempting the last of the great firsts 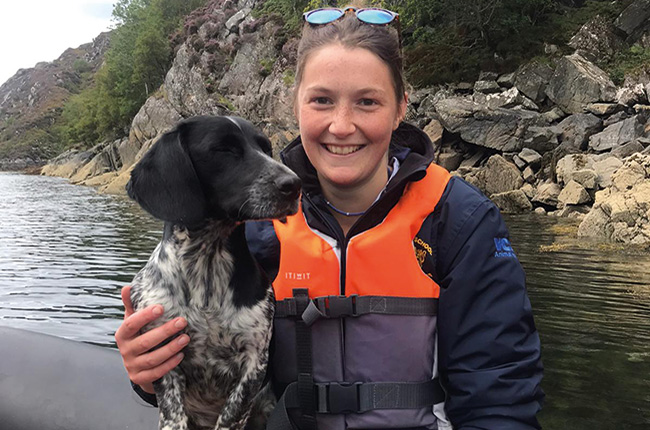 I am the only woman, the youngest person and the only vet on the Northwest Passage (NWP) team rowing the Arctic route between the Atlantic and Pacific oceans later this year. It is a voyage that is considered by some to be ‘the last great first’.

The 3700 km route begins from Pond Inlet on Baffin Island, Canada, and ends in Point Barrow, Alaska.  The trip is expected to take over two months and is only possible because the region’s climate is changing and the sea ice is retreating, opening the route between July and September.

How I got involved

As one of a small group that is planning to row across the Atlantic Ocean in 2024, as part of the Talisker Whisky Atlantic Challenge, I follow a number of ocean rowing pages on social media. When I saw the NWP team was looking for members, I contacted the trip’s leader, adventurer Leven Brown, and was unexpectedly offered a place on the voyage.

A huge component to the success of this type of expedition is picking the right people. Every crew member must be a good communicator, with the ability to cope with the mental and physical challenges they are likely to face. They also need to be able to live with 15 others in a confined space for two months. Some would say eccentricity is also a necessity.

The NWP team members are from different backgrounds and countries – the UK, Canada, the USA, Africa, Barbados and Hong Kong – and are of varying ages. A third of the team has medical training and about half of the team has previously completed an ocean row. We each bring qualities and skillsets to the team alongside determination and drive.

My own skills are developing during my first year working as a vet in mixed practice in south-western Ontario, Canada.

I saw the job advertised on the careers hub in my last year at Edinburgh vet school and, having achieved the North American Veterinary Licensing Examination, I decided being young and commitment-free offered a good opportunity to work abroad and experience somewhere new. The small rural practice I joined has a huge mix of lovely clients who have made me feel very welcome.

During my first few months, I have been on a seriously steep learning curve, but I love the variety the job offers. Most mornings involve routine dairy herd health visits, but the afternoons vary. One day I might be doing farm calls or dog vaccinations and the next I could be doing a bearded dragon spay or a leg amputation on a cat. We are short-staffed, so I don’t often have the benefit of seeking a second opinion. This can be stressful, but I have to get on with it.

Growing up in Scotland, I have always lived near the sea or lochs and feel at home in or on the water, whether it be swimming, paddle-boarding, fishing or rowing.

I am relatively new to rowing as a sport but I have always had a thirst for adventure and a passion for the outdoors.

I am fascinated by Arctic environments having joined a British Exploring Society expedition to Norway at the age of 16. There, I learnt the basics of mountaineering on glaciers and experienced seeing a serac of ice break off and crash down the mountain below us. We learnt basic survival skills, which rounded me as both an individual and a team player. We hiked, swam in melt water lakes and fished.

We also carried out water surveys and botany sampling, our findings supporting research being undertaken by masters and PhD students at Leeds university. Since then, I have looked for opportunities to further explore the region. NWP will be a perfect opportunity to achieve this.

Although relatively inexperienced, my veterinary training provides me with basic medical training. Hopefully this won’t be needed, but it is better to be prepared. In Arctic conditions, if someone is injured or sick, it can be a race against the clock to either evacuate them or fix them up. I’m also a practical person who believes that mastering the basics of fixing bits and pieces that may go wrong on the boat to be within my capabilities.

Each team member is responsible for their own physical fitness and I want to make sure I am as fit as I can be. Currently, my training involves getting on the rowing machine three times a week at the local rowing club (the lake here is frozen and it is far too cold to row outside). I also train at home for the rest of the week, which involves a combination of running, yoga and circuit training.

The plan is to take two self-righting Ice Class Expedition 44-foot boats, with a crew of eight per boat. The ocean rowing boats are a brand new design, developed by Leven and Ruari Grimes (a designer for Aston Martin). The boats’ Kevlar-carbon shell makes them light enough should we need to carry them, strong enough to withstand ice and insulated enough to protect the crew from the cold.

The conditions will be tough. The temperature will average –5°C during almost constant daylight. Winds are predominately northerly and waves of up to 50 feet and early returning ice are some of the dangers we face.

We will be self-sufficient, carrying over 100 days worth of food. Our meals will mainly from ration packs but having spent five years working as a private cook during university holidays, my culinary skills may come in useful in mixing up the rations. We shall see! As a team player, staying positive will help boost morale.

Our voyage will have a zero environmental impact on the Arctic. We will support the work of the Big Blue Ocean Cleanup, an ocean conservation organisation,  and climate scientists at New York university by collecting water samples to provide them with information on microplastics in Arctic climates and document our encounters with the environment.

'I want to be a positive ambassador, inspiring others to find a better work-life balance'

I want to be a positive ambassador for the veterinary profession to inspire others to find a better work-life balance by going out and trying something new.

Like many would-be vets, I spent much of my time focusing on books and studying, rather than the outdoors and adventure. I want to use my experiences to influence others to get exploring, demonstrating that when you put your mind to something, you really can reach your goals, no matter how unattainable they may seem at first.

As a new graduate vet I have found that I regularly feel inadequate – that I am not doing a good enough job. The bouts of imposter syndrome I experienced at university have increased since graduating; however, they aren’t present all of the time and I have had lots of positive feedback from clients. Sometimes it is tough to shake off the worries that come with being a new graduate.

This non-veterinary expedition may not be most people’s idea of a break, but for me it has been a great distraction – something to think about other than work. Being a part of something unique has given me a huge confidence boost.

Sometimes after a long day at work it can be hard to find the motivation to go for a run or do something productive, but going rowing or writing sponsorship letters is a fantastic way to wind down and forget about work. That way, I finish the day feeling far more relaxed, because I have escaped and focused on something different.

This challenge would not be possible without the support of sponsors and donations. Visit our team page @nwpexpedition and our team website www.nwpexpedition.com to keep up to date.

Each crew member is responsible for raising their own funds. As a late joiner, achieving what I need is a worry, but I am doing all I can to raise the funds I need.

For anyone who is interested, I post updates on my Instagram page @tuppence_mellish and I have a gofundme page at that offers supporters the chance to join my ‘Buy a mile club’. Sponsoring one of the many miles we will row costs £25. Find out more here.