An academic career in veterinary dermatology 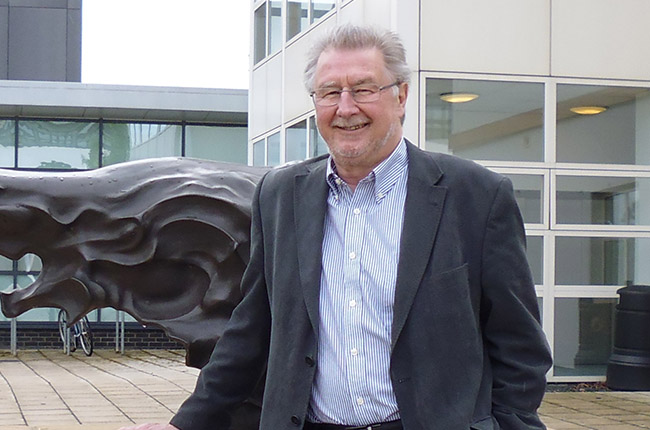 If it had been up to my grammar school headmaster, I would not have studied veterinary medicine. At the end of our second year, at the age of 13, we all had to decide whether we wished to go into the arts or science streams for the rest of our school careers. ‘Thoday, you are clearly a classics’ scholar,' he said. When I told him I wanted to study the sciences in order to become a veterinary surgeon, he retorted: ‘We will soon get you out of that idea.’ So much for encouraging the young in their ambitions!

I was born in Blackpool in the middle of the Fylde Coast and I had always wanted to go into dairy practice. However, at the end of my five undergraduate years at London in 1971, I was offered the job of junior house surgeon at the Royal Veterinary College's (RVC) Beaumont Animals' Hospital (as it was then called) in Camden Town under the leadership of Professor Leslie Vaughan. I thought that this would be a great way of being exposed to specialist knowledge from a fantastic orthopod, teacher and all-round nice guy, a chance I would never get again (there were no residencies in those days). Cattle practice could wait for a year or so. I began my training.

Unfortunately, even Leslie's tremendous talents could not work miracles. I was a reasonable orthopaedic surgeon but the subject didn't catch my imagination and I soon realised that I would never be a great one. But this internship (as it would be called today) was a fantastic way to begin my career. I learned lots of good clinical habits and no bad ones; the training I received has stayed with me for a lifetime. When final-year students or new graduates have asked me the best way to begin a clinical career, I have always replied ‘Do an internship.’

Discovering an interest in dermatology

More importantly for my future career, I was able to spend time with L. R. (‘Tommy’) Thomsett, then the only full-time veterinary dermatologist in Europe, and one of few in the world. Tommy, another charming man, saw referrals one day a week at the Beaumont and I latched on to him when I wasn't involved with surgery cases. I soon realised that dermatology was something that really did interest me. It is a very logical subject, there is lots of case material (more than in any other small animal specialism) and it doesn't require cupboards of expensive equipment to practise it. As I began to develop a degree of expertise in it in my second year, I started to see some dermatology referrals.

I thought that this would all come to an end in 1973 with the conclusion of my contract at the RVC. As my (soon to be) wife was teaching in London (not many dairy cows there), I got a small animal practice job in Wembley. I was on call every second night and every second weekend – and I loved it! It was here that I really began my career in dermatology in earnest, almost by accident.

A local practitioner, for whom I had seen some cases at the RVC, rang one day and asked whether he could refer a troublesome pruritic dog to me. I was lucky – the dog had scabies; even more luckily, I got the diagnosis on the first visit and it made an uneventful recovery. Within three months, I was seeing referred dermatology cases every afternoon (probably without making much of a dent in Tommy's waiting list), developing the first private referral dermatology practice in the UK and probably in Europe.

At many stages of my professional life, I have been in the right place at the right time. I was starting my career at the same time as the specialism of dermatology was just beginning to develop. In February 1976, I attended the inaugural meeting of the British Veterinary Dermatology Study Group at the BVA headquarters. No-one was more surprised than I when I was elected to its first organising committee.

Also that year, I was offered a partnership in the practice, but by then I had decided my ambitions lay elsewhere. I wanted to do more dermatology in an academic environment but it wasn't that easy. In those days, university clinical departments were small. To specialise in dermatology, it had to be a job in a medicine department: Edinburgh had a vacancy in 1977 and I was appointed as a lecturer. Then I had another fantastic piece of luck. My new, immediate boss, Charlie Mackenzie, senior lecturer and head of small animal medicine, was a delightful and encouraging man. He readily agreed to my setting up a dermatology referral service and, subsequently, in 1980, to my registering for a PhD part-time while continuing in my lectureship. Complementing it all was that I was working in Edinburgh, one of the most interesting and beautiful places on the planet.

Academia was not a soft option

It was tough in those early days. Although many may think of academia as a soft option, I had a young family, was on clinics two out of every three weeks, and out-of-hours first-call one in six (albeit an absolute luxury compared with what I had been doing in practice), and had to integrate final-year teaching with my clinical commitments and my lecture courses while at the same time trying to carry out my PhD research. This was the thing that could always wait when there were other things to do; most of my research was done between 17.00 and 22.00 in the week and all day every weekend when I wasn't on call. It took me just over five years. I talked to one of my residents recently about my duties as a lecturer in the 1980s compared with her current job; her view was clear and simple: ‘That was then, this is now, Prof.’

For part of my PhD research, I had decided to investigate the thyroid function of cats with a condition then termed feline ‘endocrine’ alopecia, purely because it showed some similarities to the cutaneous manifestations of canine hypothyroidism. Now we know that, in most cases, the syndrome has nothing to do with thyroidal malfunction. My first job was to develop assays for feline thyroxine (T4) and triiodothyronine (T3). I had more or less got these sorted out and had developed assays with standards in feline serum when I had my next piece of luck: the first cases of feline hyperthyroidism were reported in the USA and rapidly also appeared in parts of Europe. I had many of the laboratory tests ready to go and spent a large amount of my time over the next 20 years investigating aspects of this condition, which had seemed to appear from out of the blue and which now is regarded as the commonest feline endocrinopathy.

But luck usually holds for only so long; in 1985 a disaster befell the ‘Dick’ with all three of its clinical professors and Charlie Mackenzie dying that year. The department had no really senior person to lead it and a number of us had to step up to the plate. I became head of small animal medicine, together with my other duties, while at the same time trying to write up my PhD. It was a tough time.

I really enjoyed teaching the final-year students in the 1980s. The students and I weren't so different in age and we would often go out for a pint together on Friday nights after a week's work. Now, with the age gap being so much bigger, this would never happen, but it means that I remember the students from those days far better than those from recent years.

The 1980s and the early 1990s saw the beginning of UK and mainland European veterinary specialisation and, once more, I was lucky to be in the right place at the right time. In 1987, I was asked to chair the RCVS's first dermatology board and subsequently was awarded its diploma in veterinary dermatology. In 1992, I was appointed a founding diplomate and European veterinary specialist in dermatology by the European College of Veterinary Dermatology (ECVD). These were exciting days, when so many people gave up their time to help set up specialisation in a wide range of subjects in the UK and in mainland Europe; it has been a tremendous success.

I also very much enjoyed climbing the academic ladder at Edinburgh. With the merging of the departments of medicine, surgery and animal health, this new clinical department was one of the largest groups at the university and yet, even at the turn of the millennium, boasted only three professors. This was about to change; the enlightened leadership of the university accepted that, with a minimum 50 per cent clinical service component, it was not possible for veterinary clinicians to achieve the same numbers of grants awarded and papers published as those who did not have this commitment, and in 2006 and 2007, a total of six new personal chairs were awarded in veterinary sciences at Edinburgh. This is a trend that has since been followed to a greater or lesser degree at the other UK veterinary schools.

Since my retirement last year, I have been asked a number of times what has given me the most satisfaction in my career and I would single out four things: taking part in the development of dermatology nationally and internationally; resident training – I have had the privilege of training 13 dermatology residents from 10 countries (nine of them are now ECVD diplomates, three are RCVS diplomates, one is an American College of Veterinary Dermatology diplomate and two have also gained PhDs); contributing to the body of knowledge culminating in the period 2002/06, when Edinburgh was reported to be the top-cited veterinary dermatology group in Europe and fifth in the world by the journal Veterinary Dermatology; and being awarded a lifetime achievement award by the ECVD in 2012.

It has been a great ride and I have enjoyed (almost) all of it. With the exception of its keratinised components, I never did get to see a dairy cow professionally. Perhaps scientists shouldn't talk about luck but it seems to have played an important role in my career by my having been in the right place at the right time on so many occasions.