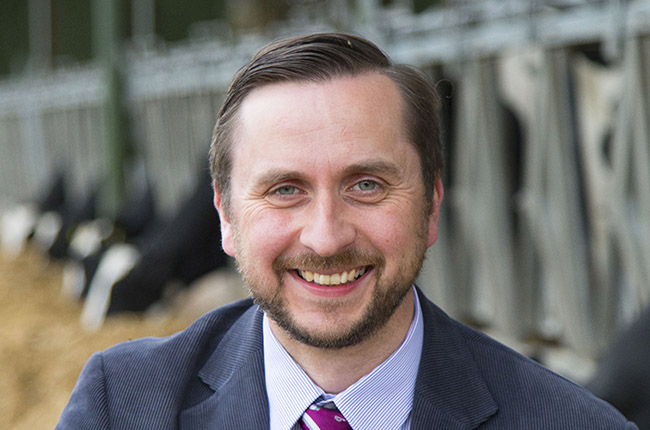 At vet school, like the majority of my peers, my focus was on mixed private practice, albeit with a large animal preference, and with the possibility of academia also featuring as a consideration for the future.

Looking back on the 19 years since finishing vet school, those formative aspirations have been fulfilled. I started my career in mixed practice with a farm animal bias in Northern Ireland and Scotland, and am now an academic, teaching farm animal health and welfare as a senior lecturer at Harper Adams University in Shropshire. Perhaps the unexpected part has been the time in between: the 12 years spent as a veterinary officer (VO) with the Department of Agriculture and Rural Development (DARD) in Northern Ireland, and the three years of studying bovine tuberculosis (bTB) control as a PhD researcher at Durham University – 15 years that have brought me immense satisfaction and fulfilment. This career trajectory has culminated in me becoming the first RCVS Recognised Specialist in State Veterinary Medicine earlier this year, and in this article I reflect on my career to date, particularly the path to specialist status.

I qualified from the University of Glasgow in 1996, and my first job was in County Antrim in a nine-vet mixed practice. It was a difficult time to begin farm practice because of the BSE crisis, which seriously affected the financial viability of both the beef and dairy farming sectors, reducing the number of farm visits and the amount of money that farmers were prepared to spend on individual animals. Moving over to practise in Scotland I found a similar picture there, again working in mixed practice with a cattle and sheep bias. Farm visits were increasingly reduced over the succeeding months, and improving returns from small animal practice were supporting the deficits on the large animal side.

Returning in late 1998 to practise near to where I was brought up in Northern Ireland, I was questioning my future as a mixed practice clinician. I was spending a fair proportion of my time TB testing, and with many cattle being euthanased rather than attempting treatment for economic reasons, my focus for the future turned elsewhere. Having had a positive experience as a veterinary student on summer placement with DARD, and after talking to colleagues already working in the State Veterinary Service, I decided to apply for a position as a VO. The application was successful, and in the summer of 1999 I began my new career as a government vet in Ballymena Divisional Veterinary Office, where I worked for the next eight years.

There was still a lot of TB testing to be done of course, but now there was much more investigation of outbreaks and a wider perspective on control and eradication across herds and areas. In addition to TB control, I was also involved in the investigation of actual and suspect cases of other diseases of particular concern for the state vet, including BSE, bovine brucellosis, anthrax, other zoonoses of public health significance such as salmonellosis and Escherichia coli O157, sheep scab, and the epizootic diseases across the farm animal species. Although my duties majored on enzootic disease control, I was also frequently involved in export and import certification, animal welfare checks on farms and during transport, together with the inspection of bovine artificial insemination facilities, broiler breeder farms, chicken and turkey hatcheries, riding stables, pet shops and boarding kennels. My previous experiences in private practice came in very useful indeed, but I was also learning new knowledge and broadening my skills.

As an employee of a state service whose VOs are dual-trained, working as both field VOs and Official Veterinarians (OVs) in meat plants as the need arises, I also had regular experience in meat hygiene, providing relief cover in poultry, cattle and pig slaughter plants. There was a strong correlation between these work areas, and the integration between field and meat was (and remains) a real strength of the DARD veterinary service.

Exotic diseases in the field

One of the most challenging times of my career was being heavily involved in the outbreak of foot-and-mouth disease (FMD) in 2001. I became an ‘infected premises VO’ and, after having seen clinical disease in sheep and cattle, visited multiple suspect FMD cases in the following weeks. I examined hundreds of sheep for mouth and feet lesions.

In later years I used my practical experience of FMD to help organise and conduct desktop FMD exercises as part of our contingency planning for the possibility of future outbreaks, and was a member of the veterinary service's epizootic disease team.

There were certainly suspect epizootics to be investigated across the farm species in the subsequent years, but 2007 brought another significant and unexpected disease – bluetongue – to the UK, and I volunteered with other DARD veterinary colleagues to travel to England to work on the control effort. Seconded to Defra and based in Suffolk, I was once again diagnosing exotic disease in the field.

Rather than perhaps a preconceived view of state veterinary medicine being a limited field, on the contrary, the job gave me opportunity for a great variety of work. In addition to diagnosing and controlling disease, I was a member of the DARD veterinary service enforcement team, investigating serious breaches of animal health and welfare legislation, and preparing prosecution files for the consideration of the Public Prosecution Service for Northern Ireland.

This brought occasions when I attended court to brief prosecuting barristers on case files, and also to act as an expert witness before the court. It was often difficult and complex work, and attention to detail on farm and in legislation was vitally important. I also gained management experience as acting divisional veterinary officer to cover leave periods; managed the meat inspection teams in abattoirs when providing cover; and also had a period in a veterinary policy role at DARD's headquarters. At various times I performed analyses of new legislation and staff instructions, and provided advice on implementation in the field.

In 2007, I changed direction again, transferring internally within the veterinary service to leave the field office and move into the veterinary epidemiology unit (VEU). Focused particularly on the epidemiology of bTB, and conducting research into risk factors for the spread of the disease in Northern Ireland, I provided policy and disease control guidance to policymakers and field VOs. I became a trainer in epidemiology for the DARD OV meat training course, and in the epidemiology of bTB for the veterinary practitioners' bTB training course and VO induction course. Again, as an epidemiologist, there were opportunities to be part of working groups testing the DARD strategy response to avian influenza, and another desktop exercise to test the strategy for avian influenza at operational level.

Postgraduate education has been one of my passions throughout my state veterinary career. During my time as a field VO I gained the RCVS certificate (2003), and later became the first and only person to gain the RCVS diploma in state veterinary medicine (2006). While working in the VEU, I completed a masters degree in veterinary epidemiology and public health from the Royal Veterinary College, London. Studying by distance learning between 2008 and 2010, I graduated in 2011. In 2010, I was a Northern Ireland civil service US-UK Fulbright scholar at the College of Veterinary Medicine, Mississippi State University, where, in collaboration with the Social Science Research Centre, I conducted a qualitative research project on factors affecting submissions to veterinary diagnostic laboratories.

This introduction to qualitative social science methods had a great influence, convincing me of their usefulness and relevance to veterinary medicine, and leading to my next career change – this time moving into academia to begin a PhD. Sponsored by DARD, I started my PhD in the geography department of Durham University in October 2011 and finished in September 2014.

I researched factors affecting bTB eradication in Northern Ireland using a qualitative social science approach based on interviews with farmers, vets and others involved in the bTB programme. To become a human geographer was a tremendously interesting, challenging and rewarding experience. I now feel comfortable in both the natural and social sciences.

Smitten by academia, I have been working at Harper Adams University since October 2014, but my love of state veterinary medicine has not waned, and remains extremely relevant for my academic role. I have been teaching veterinary epidemiology and veterinary public health to students of agriculture, animal science, bioveterinary science and animal behaviour and welfare, and have taught classes on zoonoses, enzootic and epizootic diseases, and animal welfare legislation as part of the farm animal health courses.

My research interests allow me to use the experiences I have gained over the years as a clinician, state vet and epidemiologist, and apply them to the often complex problems that we face in the animal health sector, not just in the UK, but globally. This was vividly illustrated to me on a UK Newton Fund trip to Brazil with a ‘One Health’ theme, organised and led by the University of Surrey and University of São Paulo earlier this year. We discussed zoonotic disease problems such as brucellosis, tuberculosis, glanders and rabies along with animal and human welfare concerns, learning from each other the vitally important role that vets, human health workers, ecologists and social scientists can play through collaboration across disciplinary and international borders to improve the health and welfare of both animals and people.

I continue to write and publish on bTB, and will supervise a PhD on dairy calf health and welfare from September 2015. I seek ongoing opportunities to use my RCVS specialism in state veterinary medicine in the future, and look forward to seeing where it leads me. It has been a fascinating journey so far.